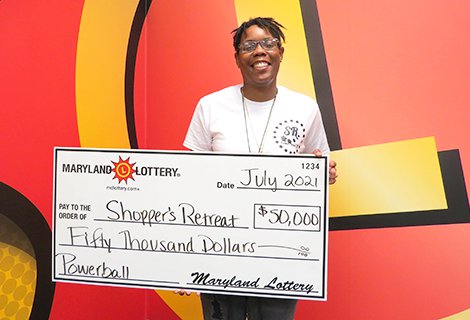 It wasn’t the cryptic message in a fortune cookie that inspired a Baltimore County woman into action, but rather the string of numbers the fortune contained.

The third time she played Powerball using those numbers, the 38-year-old won a $50,000 third-tier prize.

The winner, going by the nickname “Shopper’s Retreat,” told Lottery officials that she noticed the lucky numbers shortly after cracking into a fortune cookie. “They just spoke to me,” said the Essex woman.

“Shopper’s Retreat” decided to use the numbers the next time she purchased a Powerball ticket. Although she didn’t win using the fortune cookie’s numbers in two drawings, she persevered.

On July 7, before that night’s drawing, she bought a $2 ticket at One Stop Convenience located at 321 Stemmers Run Road in Essex and again played the numbers. She almost tossed that $50,000-winning ticket by mistake while tidying her home the next day! Luckily, she decided to scan it using the Lottery’s mobile app ticket checker. The ticket matched four of the numbers drawn plus the Powerball to give her the third-tier prize.

When her phone flashed back a quick “Congratulations,” “Shopper’s Retreat” knew she had won! She quickly contacted her sister and mother, showing each of them a screenshot proving her Lottery luck.

The lucky lady is also an entrepreneur. She recently started a rideshare and grocery delivery business called Shopper’s Retreat, which inspired her winning nickname. She said the funds from her Powerball win will provide seed money to help her business grow.

Players have plenty of time to buy tickets for the next Powerball drawing on Saturday, July 24. The jackpot, which keeps rolling, is set for $174 million and the cash option is $125.5 million. In 2021, 33 Maryland players have won $50,000 Powerball prizes.