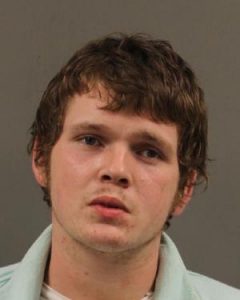 Baltimore County Police charged a suspect in two armed commercial robberies in Essex last month and believed to be responsible for additional robberies in neighboring jurisdictions.

The investigation in Baltimore County began on April 29 with the robbery of two businesses under similar circumstances just hours apart.

Police were called to Dollar General in the 100 block of Beacon Road in Middle River around 7:30 p.m. after the suspect purchased items but stayed in the store and continued shopping. He returned to the check out with additional items, but this time he stepped behind the counter and produced a handgun, ordering the cashier to open the safe. He fled with an undisclosed amount of cash.

Just after 9:30 p.m. police responded to a second armed robbery, this time at Domino’s Pizza in the 600 block of Eastern Boulevard, in Essex. This time the suspect ordered food, then stepped outside. When he returned, he again stepped behind the counter, produced a handgun and ordered an employee to open a cash register and the safe. Again, the suspect fled with an undisclosed amount of cash.

Baltimore County Police Robbery Detectives worked cooperatively with the Anne Arundel County and Baltimore Police Departments, which had both experienced similar crimes, to identify the suspect, identified as Zachery Erin Kuhn (23) of the 1300 block of Pontiac Avenue in Brooklyn, MD. Kuhn and a female passenger were arrested during an April 30 traffic stop, at which time a loaded handgun was also located on Kuhn.

Kuhn is held at the Baltimore County Detention Center on denied bail status following a bail review hearing on Monday. The woman was released without charge.