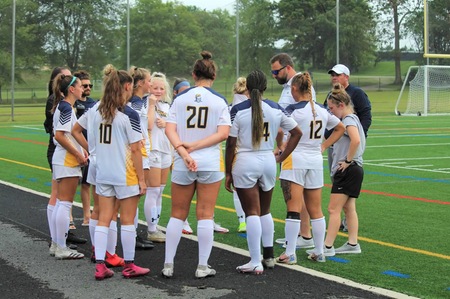 The No. 14 NJCAA Division II Knights lost this past Saturday 7-0 to Division I No. 8 Monroe College at CCBC Essex Stadium. It’s the first time this season Essex was shutout and their second straight home defeat.

From the opening whistle, Monroe (4-1) controlled the tempo of the game. The Knights (5-2) had a good opportunity in the beginning of the first half, but Mustangs goalkeeper Stefane Rosa made the save. CCBC Essex had only a handful possessions in the first half, but Monroe’s technical skills thwarted most scoring chances.

The Mustangs played simple and technical throughout the match, using the width of the field and feeding players wide to create space for its midfielders. Monroe found the back of the net three times in the first thirty minutes of play. Each goal was created through great build up play and slotted home for easy finishes.

Perry Hall High Grad Kara Dietrich came into the match with 19 goals this season. Monroe limited the Knights top goal scorer to a season-low two shots on goal. Dietrich tried to create chances for her team throughout the match, but the Mustangs defense defended the opportunities well.

Essex back and Perry Hall grad Aya Neal was one of the Knights stand out players of the match. The sophomore led the back line vocally and her strong defense play frustrated the Mustangs. Despite the final score, Neal showed determination and began playing up in the attack to create goal-scoring opportunities.

The last four goals of the match were conceded midway through the second half. Two of the tallied came from Luana Grabias who finished with hat trick, having scored once in the first half as well.

The Knights travel to CCBC Catonsville this Saturday to take on the Cardinals.