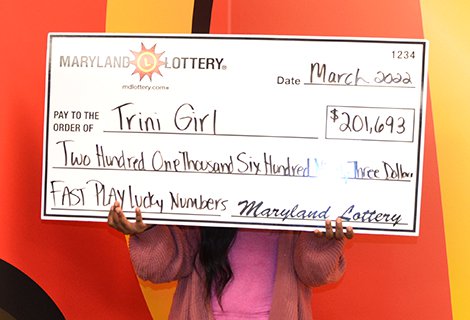 Have you ever woken up and just knew you would win the Maryland Lottery?

Well, that’s what happened to our winner, “Trini Girl.” Just a year after the dream, the Dundalk resident purchased a $10 FAST PLAY ticket and became $201,693 richer!

“I told my fiancé that I would win the Lottery,” said the winner, who selected the nickname “Trini Girl” because she was born in Trinidad and Tobago.

She immigrated to the United States at age 11. “He didn’t believe me at the time, but I’m here now!”

The 26-year-old purchased multiple FAST PLAY tickets and then walked around the store to get food before scanning her tickets. Very quickly, the Baltimore County resident became upset at the message she saw on the screen about the jackpot for the Lucky Numbers game.

“I saw that the progressive jackpot dropped from over $200,000 to just $100,000 and I immediately felt a sinking in my stomach as I scanned my tickets,” said “Trini Girl.”

“And then, I realized the reason the progressive prize fell – I won!”

The winner said she would use the money to pay down debt, save for future purchases and take her two daughters to Disney World.

Her retailer, 7-Eleven #25756 located at 7501 Dunmanway in Dundalk, will also benefit from selling one of 40 progressive jackpot prizes.

The Baltimore County store will receive a $1,000 bonus from the Lottery for selling a winning FAST PLAY ticket of $100,000 or more.