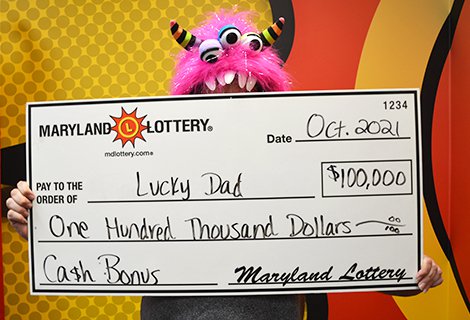 Playing Maryland Lottery scratch-offs has been a just-for-fun activity for a single dad from Rosedale, but the fun expanded explosively last weekend. He won $100,000 on a $10 Ca$h Bonus instant ticket!

“I told my family and we were just running around the house,” he told Lottery officials after claiming his prize. “I was in shock. I can’t believe it.”

Even after taking a seat in the Lottery Winner’s Circle, the reality of the situation still wasn’t sinking in, he said. “Lucky Dad,” which is the name he is using to tell his winning story, had played Lottery games for years and never given much thought to what he would do with a big prize. He typically picks up a few instant tickets each week and scratches them off at his leisure.

“I always play hoping to win,” he said. In the past, the scratch-off fan won relatively small prizes, which kept things interesting. The 32-year-old did win a prize at the $1,000 level about three weeks before his big score.

“Lucky Dad” double-checked the $100,000 winning scratch-off numerous times after discovering his shocking top-prize win. Since then, he considered potential uses for the prize and settled on buying a small house to live in with his 5-year-old daughter. A contractor by trade, the loyal player anticipates buying a place that needs work.