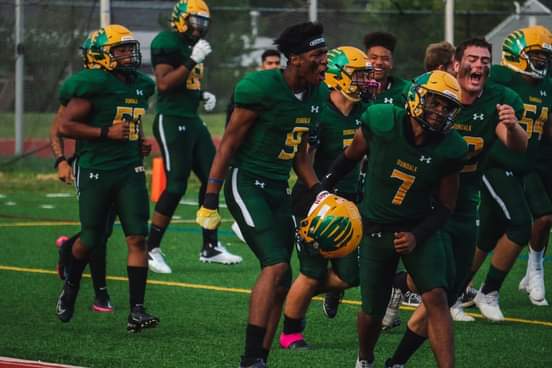 The shock of the weekend is Chesapeake’s 14-13 win over Patapsco. The Bayhawks were winless coming into the game and the Patriots were 4-0. Chesapeake looks for their second win in a row against winless Eastern Tech. Patapsco looks to bounce back at Sparrows Point this Friday.

Kenwood was looking to go 3-2 on the year but fell short on the road against a 4-1 Owings Mills team. The Bluebirds will look to get back to .500 as they host Randallstown Friday.

Chesapeake (AA) 44 Perry Hall 19
Perry Hall lost to the other Chesapeake from Anne Arundel County at home. After getting off to a 2-0 start, the Gators have lost three in a row. They look to bounce back this week against a winless Dulaney

Pikesville 13 Eastern Tech 8
The Mavericks are now 0-5 after a loss to Pikesville. It appeared Tech’s game with Chesapeake this week was going to be a game of two winless teams, but the Bayhawks are now 1-3 with their Patapsco win. Tech will try to get first win.

The Pointers are now 4-1 after defeating Loch Raven 24-10. They have won four straight after a 38-7 opening day loss against Harford Tech. This now sets at an interesting rival game between 4-1Sparrows Point & 4-1 Patapsco this weekend.

Mount Carmel 72 Washington (Princess Anne) 0
The Cougars wrapped up their five-game road trip with a 72-0 win on the Eastern Shore. Mount Carmel has traveled throughout the state and had a game in Philadelphia but still managed to have a 3-2 record. They return to Essex for the first home game of the year, but have to play powerhouse Concordia this Saturday night.

Overlea had a chance to pick-up a win on the road at Hereford but fell short 7-0. The Falcons are now 2-3 and will play Owings Mills at home this week.

Parkville has bounced back from a 1-2 start as they defeated Catonsville and Dulaney the past two weeks. The Knights will host defending 3A State Champion Franklin next week.

Dundalk 56 Towson 0
The Owls game against Towson was pushed back a few days until Monday, but that did not slow down their offense in a 56-0 win. Dundalk is still undefeated and returns on a short week to play at Catonsville.