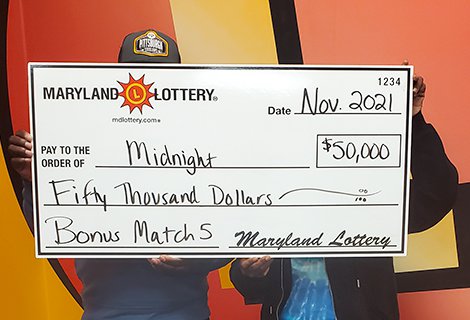 A 67-year-old Parkville retiree from Johns Hopkins Hospital is now $50,000 richer from the Maryland Lottery.

“Midnight,” which is the nickname the anonymous winner selected for publicity, says she’s “living the dream.” She retired in February and then, on Nov. 5, found out she won $50,000 playing Bonus Match 5 for the first time.

On Nov. 5, “Midnight” was doing what she normally does since retiring. She was out, enjoying the day, stress free with no worries. On a whim, she stopped in Cork & Bottle located at 4305 Ridge Road in Mt. Airy and purchased a $6 quick-pick Bonus Match 5 ticket.

The mother of three sons purchased her ticket and went on about her lovely day. Later, she gave the ticket to one of her sons for safe keeping while she went out of town for the weekend. Her son, who accompanied her to claim the prize at Lottery headquarters, said he scanned the ticket on the Lottery App on his phone after the evening drawing and was blown away at what he saw.

He had to scan the ticket five or six times just to make sure he wasn’t seeing things.

“I texted her the picture of the message on my phone and called her,” said the son. “I said, ‘Ma, you have a winning ticket, look at your phone!’”

“Midnight” said she looked at her phone that night in shock. “It’s funny, I was just telling my son we were going to win.”

The lucky player stayed calm and enjoyed her weekend. She came home on Sunday and stopped at her son’s house to retrieve her lucky ticket. “Midnight” told Lottery officials that she is engaged and will use some of the winnings toward a small, intimate wedding. She also plans to take a vacation and will save the rest of her windfall.