-photo courtesy of Heritage Society of Essex and Middle River-

There were reports and photos on social media that the Essex Cube was removed on Friday, March 4.

The Heritage Society of Essex and Middle River, Inc, which announced last year that the Cube would be replaced by a new landmark, confirmed the removal on Friday. The cube is now at the museum. A statement was released by the museum on Friday.

“As many of you may have noticed, the Essex Cube has been relocated from its location on Eastern Blvd. to make way for the new Essex Landmark Sculpture, which will be installed later this Spring. Rest assured, the Cube is safe in storage until it can be reinstalled at the Heritage Society of Essex and Middle River (Essex Museum). The Heritage Society is working closely with the Chesapeake Gateway Chamber of Commerce and its Eastern Baltimore County Task Force to ensure that the Cube will be preserved for ourselves and future generations. More details will follow, and we will be asking for the community’s support with this project,” said the statement.

“We are looking forward to the beautiful new Essex Landmark sculpture which represents the beauty and hardworking people in our community. Progress is a great thing, and these are exciting times for Essex.”

The removal of the Essex Cube has brought some controversy as some folks were wearing “Save the Cube” shirts at last year’s Essex Day. 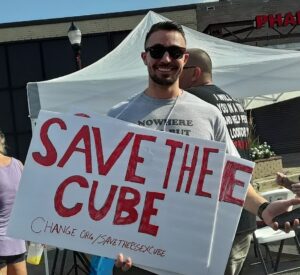